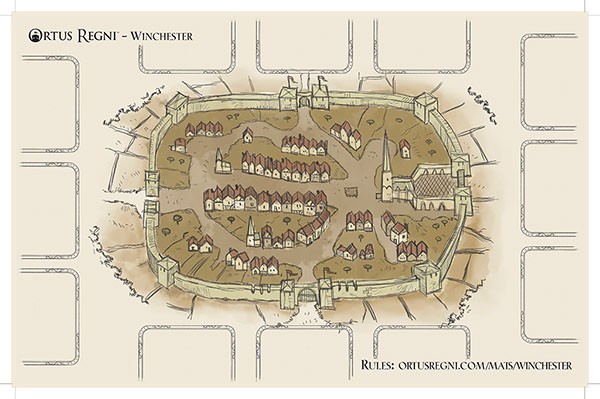 Before London was the center of England, before Canterbury was the seat of the English Church… Winchester was the capital of the Anglo-Saxon Kingdom of Wessex and its cathedral was the resting place for many of the first English kings. This is not an era of great urban centers, indeed, but Winchester rises above the other Burhs and fortified towns of the shires. It is the center of both political games and literacy, and hosts much of the pageantry of the kingdom.

At its heart Winchester is the meeting place for “personages who matter” in the kingdom of Wessex, a small political maelstrom. The Earl who has the most political, social, and clerical suasion over this important center gains several advantages over all other Earls in their quest to rule the entire kingdom; and found a new dynasty in this city of kings.

Control of Winchester provides two important benefits to an Earl:

Each of the 4 player positions on the mat has 3 open slots, for either Vassal or Monk cards. Vassals and Monks are the only two Face Cards that can influence the Capital. As an Action, on your turn, you can place either of these cards into an available slot in front of your Earldom.

If at any time you have more influence points in Winchester than any other Earl then you control the city. In a tied situation, no Earl controls the city. 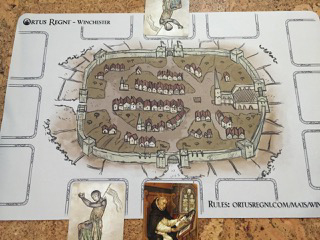 The Vassals and Monks that you have placed in Winchester remain there – comfortably ensconced in their feudal urban positions – you cannot remove them yourself, or bump a Vassal out of a slot to replace it with a Monk (as you can with Lords in their Castes). The Vassals placed into the city are not Lords themselves, and therefore cannot participate in Political Struggles. Vassals and Monks in Winchester also never participate in Battle.

An Earl may play a Treachery card on an opponent’s Vassals or Monks in the city of Winchester, to assassinate and remove that courtier!

Politics proceeds normally when this happens; if you have an Allies card you can attempt to save your courtier, and this might proceed into a Political Struggle.

Importantly, the political protection Winchester provides, when controlled, does not extend to Vassals and Monks that are inside the city itself.

If someone else has control of Winchester there are two ways to remove this benefit, or wrest it away for yourself. You can either place more courtiers – more Vassals, or Monks – into the city to tie or best their influence points, or you can attempt to assassinate some of their courtiers with Treacheries.

Great Earls may love their countryside castles and estates, much more than the dirt and noise of the city, but they ignore the capital at their own peril. Winchester can be a deceptively powerful place to control.