A unique way to play Ortus Regni, for 2-4 players.

You are Knights of the Realm, not great Earls. But you hope to rise in stature by having that title bestowed on you and your house.

Earning the respect of the great peers of the Realm, catching their eye with your strength and guile, will secure your rise.

A Knight wins Knight-errant instantly when they possess any 3 of the unique victory conditions; as mere Knights would dare not touch the person or possessions of a recognized Earl. Status is everything in this world, and all the other great Earls of the land would immediately crush such a challenge to the hierarchy!

Knight-errant uses only the cards from one complete Earl card set, i.e. one Earl color.

Remove the Palace card from this set, and set it aside. Shuffle all the 90 remaining cards of this Earl card set together. This will be the Game deck. Place it near the center of the table, but off a bit to one side.

All Earl card discards in Knight-errant go to a single discard pile. If the Game deck ever runs out, then this discard pile is reshuffled, and play continues.

Your Tent and Your Men

You are not great Earls. But you are noblemen and noblewomen. You start the game with the resources in your campaigning camp.

Your Tent represents your camp and some limited holding. Place 3 cubes of your selected color (which can be the same as the Earl set chosen for the game) on your Tent. Thus your tent is strength 3 initially, as strong as a Palace; your camp is harder for opponents to find, catch, surround and destroy than a structure built in stone.

Your Tent is a Fief in the Ortus Regni system, and you can attach Properties to it but it is permanently outside of any Towers that you place to protect the rest of your Earldom tableau. Your Tent is your starting Fief. Knights begin the game with no Palace or Castle.

You also begin the game with 2 Infantry Army cards in play. These are your camp followers and men at arms. Place 2 cubes of your selected color in the circles of each Infantry card.

Both your Tent and your camp Infantry are repairable during gameplay. Replacing any 1 of these cubes costs you an Action.

Note: You can use our Print-and-Play decorative Knight-errant files to make your own visual campaigning camp tableau.

Draw 4 cards from the shuffled full 90 card game deck. Place these 4 cards in a row, face-up, in the center of the table. Place the Game deck near the visible cards.

Getting cards in Knight-errant

Instead of possessing an Earl deck, Knights have the option, at the end of their turn, of selecting a single card from the row of 4 visible cards, or drawing a random card from the top of the Game deck.

Whenever a card is removed from the row of 4 visible cards, a replacement is immediately drawn from the game deck and placed face-up in that row.

Almost all of the normal Ortus Regni rules are in play in Knight-errant, with a couple exceptions.

You cannot Bequeath in Knight-errant. This is your quest alone, other generations must fight their own battles.

Jousts are in play, but remember that your Tent is a Fief. So, if you manage to acquire a Castle and still have your Tent then you have two Fiefs and cannot automatically opt out of the Joust. You also cannot ante your Tent into a Joust.

The King card is not available to players in Knight-errant.

The Vikings operate as normal.

All cards and rules otherwise play normally, with the exception of the Banquet and the Banner cards.

You have no Earl deck to draw from with a Banquet, but the Banquet card is valuable in Knight-errant.

When played as an Action the Banquet card allows you to draw 2 cards from the Game deck. You will then still be able to either select a card from the 4 card visible row or draw a single card form the Game deck at the end of your turn.

You can still Joust, but cannot claim the King card, or Bequeath, but the Banner can be quite useful in Knight-errant.

When played as an Action the Banner card allows you to select 1 card from the 4 card visible row. Then the remaining 3 cards in that row are immediately discarded, and 4 new cards are drawn and placed face-up! Thus a player gets to select 1 card form that row and the full row is entirely refreshed. You will then still be able to either select a card from the 4 new cards in the visible row or draw a single card form the game deck at the end of your turn.

Your Tent is a Fief. Properties can be attached to it as if it were a Castle or Palace, but it cannot accept a Lord. You are the Lord of your camp.

Your Tent starts the game with 3 cubes. These cubes are its strength. Unlike Castles or Palaces in normal Ortus Regni, which do not suffer incremental damage, the strength points of your Tent can fluctuate.

Any damage points that reach your Tent will remove that number of cubes. If it suffers 2 incoming damage points, for instance, then 2 cubes are removed but it survives if there is 1 cube left.

You can spend an Action on your turn to replace 1 cube that has been removed; up to the original maximum of 3.

If your Tent loses all its cubes then it is destroyed and any attached Properties are discarded. You are out of the game if you hold no Fiefs (Tent or Castles), but if you hold a Castle you can later recover your Tent by spending an Action to place a cube on it.

You start the game with 2 Infantry cards, marked with 2 cubes. These are your loyal camp followers.

They do not require Land to field into Battle, and are equivalent to Garrisoned Army cards in this way.

One of these special Infantry cubes is removed if it receives 1 damage point in battle, like a normal Infantry card would be. But you can spend your Action to replace 1 such cube. Thus if you lose both your camp followers you could replenish then in only two turns, if you wish.

Being made an Earl - Victory

The great Earls of the Realm are always looking for powerful and resourceful nobles to join their ranks. It is better to make such individuals peers and allies, inside of the feudal system, than risk rebellion or a deeper challenge to the high nobility.

There are 8 victory conditions in Knight-errant. A Knight has succeeded in being recognized as an Earl the moment they possess 3 unique victory conditions; duplicates of one condition only fulfill 1 of the 3 required acquisitions.

A Knight has been defeated and eliminated the moment they possess no Fief. But remember that your Tent, if it has a cube, is a Fief.

We offer a custom Variant Mat for Knight-errant in our online store, but we have always provided Print-and-Play options for each our custom gameplay mats. And we think we have come up with an elegant solution for Knight-errant.

This is a PDF file that you can print out and then fold corner to corner - the long way - to provide each player with a personal mini mat tableau for their Campaigning camp. 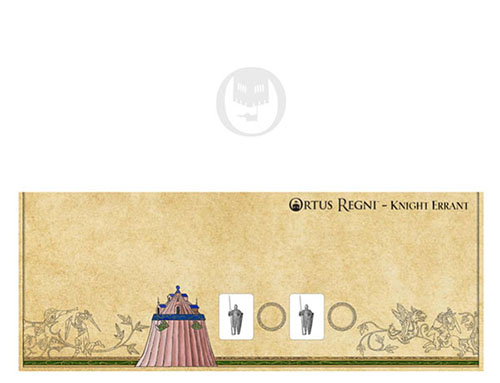 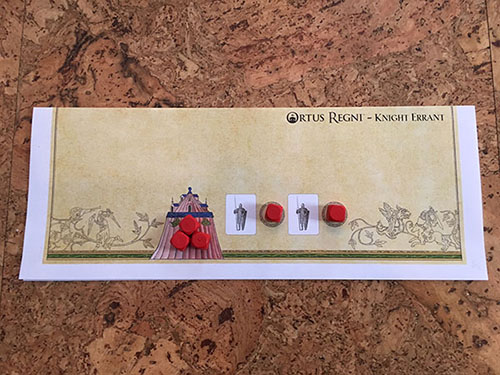 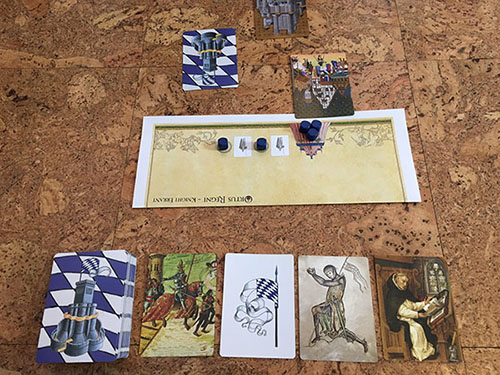 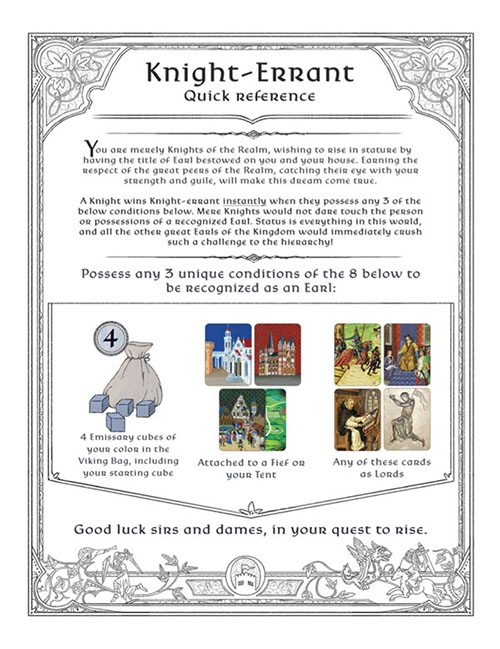 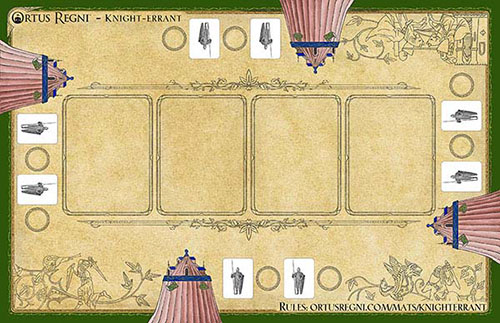 A nice added visual for your Knight-errant games. 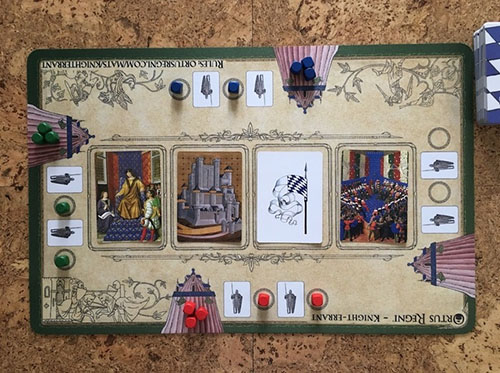 The Knight-errant mat in use, game start set-up, three player.