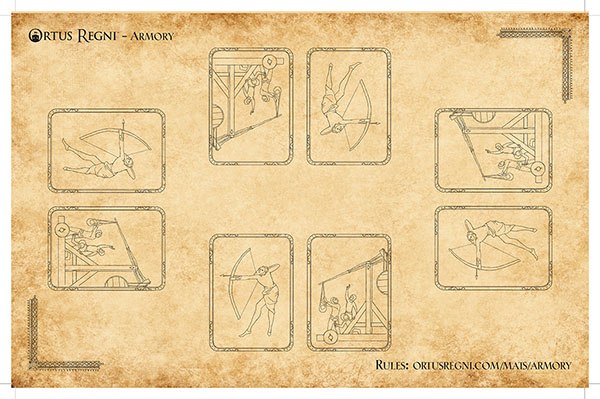 2-4 player, Ortus Regni variant.
Some might consider the heavily armored knight to be the final word in medieval combat, but the Long Bow and the Trebuchet may be the pinnacle of military technology in the High Middle Ages. Neither one was easy to acquire or operate, and both require specialized companies of skilled warriors to field effectively.

The normal card rules of Ortus Regni and the normal victory conditions apply.

The Armory mat places two specialized military Companies before each player’s position. To make use of these companies they must be Captained by a Vassal card.

To use a company, an Earl must place a Vassal card down, on their turn, as their Action, on that company. This Vassal then becomes the Captain of that company, and remains so until killed in battle or assassinated by Treachery. These Vassal Captains are not Vassal Lords, and are instead fully occupied in their special role; and do not participate in combat in the normal manner, instead the power of that Vassal Captain’s company – Long Bow or Trebuchet – may now be used in Combat.

These military companies are not themselves fielded forces in the normal manner, and instead provide their unique power to their Earl’s fielded forces; i.e. that Vassal Captain does not send or receive 1 damage in battle, and is only there to make that specific and special military technology available.

The Long Bow Company reduces the incoming damage from opposing Knights, Champions, Mercenaries, and Viking Chieftains to 1 damage (i.e. all incoming 2’s are reduced to 1’s).

The Trebuchet Company reduces the damage required to siege a Castle or Palace to 1 point. Therefore all Properties, Castles and Palaces are strength 1 to an Earl who can employ the siege train supplied by the Trebuchet company. Because of this, it almost never makes sense to employ a Raid attack once you have this Company active, as a Siege only requires 1 point of damage to reach the heart of a Fief!

Fielding a Company into Battle

If an Earl has placed a Vassal Captain on one of their two specialized companies they may then field that technology into a battle, on defense or offense.

If you choose to field a particular company – or both – then its special power is applied to that battle. Both sides can, of course, field specialized companies into the same battle. 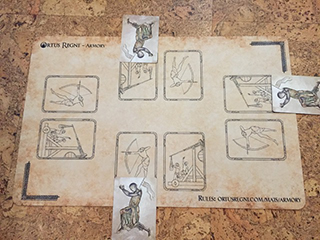 However you can reconstitute a lost Company by placing another Vassal down, as an Action, on your next turn. Vassal Captains can be Treachery assassinated. Note, they are not Vassal Lords and thus cannot participate in Political Struggles.

The Long Bow was the scourge of the mounted knight, able to pierce incredible thicknesses of armor when used by a skilled archer as a volley weapon. Long Bows were used to devastating effect by the English in their wars in France. The Trebuchet siege train represented here can be thought of as including all early siege techniques: from ladders and incendiary projectiles to the denial of drinking water, or the tunneling of walls or turrets.

These are powerful military tools, how many Vassals can you afford to use for such exotic resources? But can you afford not to, lest another great Earl overmatches you on the battle field?