The offices of the Shires are the start of a more formal secular organization in the early kingdoms of England. Evolving slowing, but surely, from ancient traditional Anglo-Saxon tribal leadership organization into the great royal and bureaucratic titles that we recognize today.

The Great Earls of the kingdom are able to ensure that their own men are placed in the great and high offices of the land.

In this variant Earls may place, as an Action, on their turn a Vassal card into an available shire office. That card remains in its new office. That Earl may then take advantage of this office for their own ends in combat.

There are 3 different shire offices on the mat: High Marshall

The top officer, the Marshall has an attached Knight army card.

The second most powerful officer, the Reeve has an attached Infantry army card.

The two Aldermen have no other resources beyond their own entourages.

Vassals in offices are not Vassal Lords. They cannot participate in Political Struggles. And they cannot be Ransomed when captured in battle.

But once in place Vassal office holders can be used in Battle, repeatedly much like Vassal Lords. They can be viewed as Vassal Lords without Castles of their own, hence not true Lords.

The Knight or Infantry card that accompanies its office holder is replenished for each new battle! It does not permanently die when assigned 1 damage in any given battle.

An office holding Vassal – whether High Marshall, Shire Reeve, or Aldermen – can be removed in the following ways: 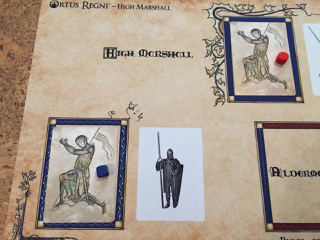 You cannot specifically target an office holder controlled by another Earl when attacking. They are not properties, castles, or Fiefs. They are more akin to the King card or a Mercenary on the table.

Note that while the Aldermen have no attached Army card they are still almost as good as a Vassal Lord in combat, because you will probably get to use them several times in battle. And they can be gained without having to place a Castle down first. Note also, that if you Treachery assassinate another Earl’s office holder, you will not also be able to seize that office immediately yourself, since placing a Vassal into it would be a second action. This means that you might have just opened up a nice office for another Earl to seize for free!