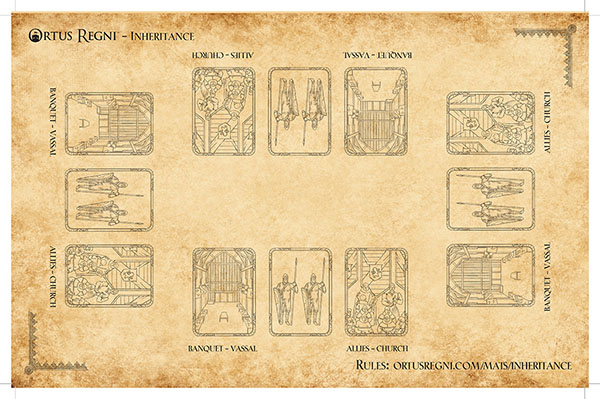 You are heir to a great old Earldom! Your ancient and noble family holds many assets and retainers. You can call upon all your house’s wealth to aid your endeavors but be careful when spending your family’s carefully acquired assets. They took generations to gather make sure you spend them wisely.

Each player gains 3 inheritance items that they may use during gameplay. Each of these assets may be used once, and are then spent. The mat presents each Earl with three small cards. Each card is an asset that can be spent whenever needed.

At the start of the game, place Viking Bag cubes on these small cards; placing 3 such cubes of the appropriate Earl color in front of each player. Then remove a cube when an Inheritance has been spent.

In order, from left to right, these Inheritance cards are:

This asset may be spent to Banquet as an Action, or to use a Vassal card in play. It is either one or the other, not both, and then you have spent this inheritance. Note that you may use the Vassal in battle, where it plays as if fielded from your Hand, or you may use this Vassal in a Political struggle. But this familial Vassal has no interest in being sent as an Emissary to the Vikings.

This asset may be spent to have 2 Army Infantry cards in play. These 2 infantry do not require Land to be fielded into a battle, on attack or defense. They must be spent together.

This asset may be spent to have an Allies card in play, or a Church in play. It is either one or the other, not both, and then you have spent this inheritance. Note that you can use this asset as an Allies card to defend yourself against a political attack… and you can also back this Allies up by spending the other inheritance asset of a Vassal, in a Political struggle; spending 2 of your inheritance assets at once.

If you choose to use the Church asset, it plays as if it was a Church property in your Earldom, but only for that moment, and this temporary Church cannot be used in Battle Damage resolutions (i.e. assigned a damage point in a Raid) or Intrigues (i.e. offered as one property stolen). 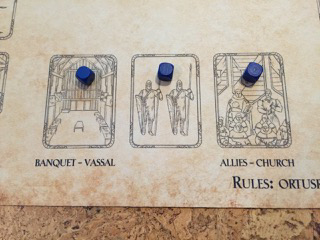 You can spend it to allow yourself to Bequeath even when the Cathedral is owned by another Earl. You can spend it to try and direct a Church Decides Battle Result card, but another Earl could also spend their Church inheritance to nullify that. In the rare case that you have a Monk Lord (an Abbot) in a Fief, you can also spend this Church to immediately allow yourself to use the Monastery Special Action and make another Earl reveal their Hand; but, of course, you can only do that once, as this inheritance asset would then be spent.

Keep in mind, all Earls have the same starting inheritances. These assets initially cancel each other out in several ways. You could attack with your inheritance Vassal and also your two Infantry, for instance, but another Earl could spend both of those assets as well.

The two Earl Card based inheritance assets also represent tricky choices. You may want to Banquet and gain two cards, but, do you really want to give up the Vassal? Maybe you need to Bequeath despite there being a Cathedral on the table, but maybe you don’t have an Allies card… do you spent that inheritance asset or wait?