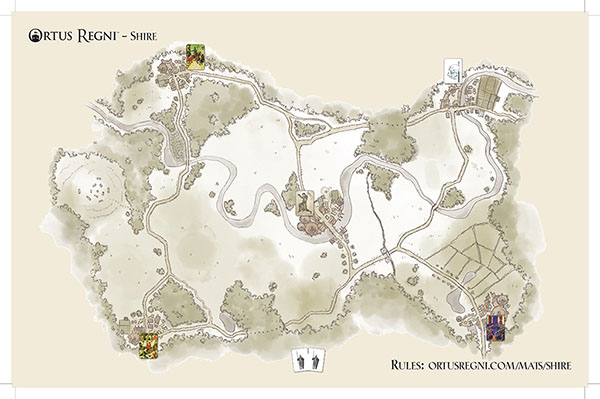 The largest and most powerful shire in Mercia is before you. The Burhs (towns) of the shire are unique, and each can provide certain important services to its overlord. One Burgh is known for its great warriors, another for its persuasive lords and allies, another for its loyal and capable vassals. Take what Burhs you can, but choose wisely, with an eye on your own strengths and weaknesses.

The normal Earl Card rules of Ortus Regni and the normal victory conditions apply; controlling a Burh in the Shire counts as a Fief, and would allow you to remain in the game even if all the Fiefs in your Earldom had been eliminated.

The Shire contains 5 fortified Burhs. Each of of these can be captured separately. Each Burh is equivalent to a Castle, strength 2, and also has 2 Infantry automatically fielded on defense when it is attacked, so a Battle card will be drawn. Thus to capture a neutral Burh an Earl must send 4 damage points to Siege it successfully. Burhs do accept Ransoms (unlike the Vikings) but all Ransom payments are sent to the appropriate discard pile, and are not added to the Burh.

Place a colored Viking Bag cube on a captured Burh to indicate ownership; once a Burh is captured the 2 Infantry are gone, and the owning Earl must field their own forces to defend their prize. All Burhs in the Shire are beyond the protection of an Earl’s Towers.

The Earl Card shown on that Burh is now available to that Earl at any time, with the following restrictions: 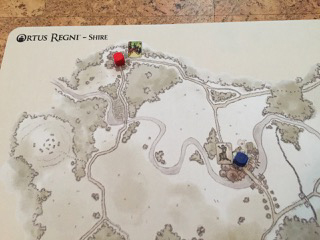 Once a Burh has been captured, it still plays as a Castle, with strength 2, but it loses its two Infantry defenders and must be defended by its own Earl in battle (if desired). But, unlike a Castle, Face Cards cannot be installed in Burhs as Lords. A Burh is outside of an Earl’s Towers – Towers do not defend Burhs – but an Earl may field whatever forces they normally can when defending their Burh against opponents. The Vikings can be directed by an Earl to attack a Burh, and if that Siege is successful the Burh reverts to being neutral and unconquered again (i.e. it regains its two infantry defenders).