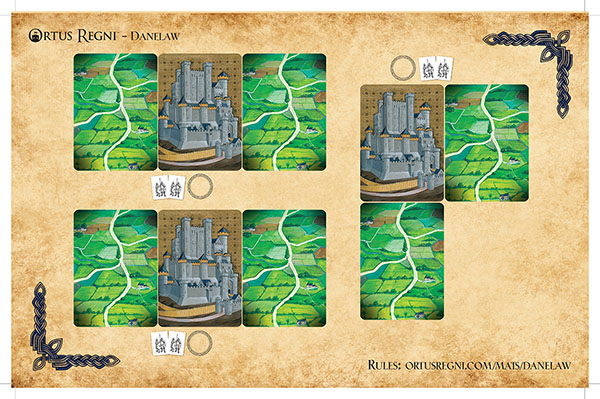 The Danes left their Long Boats behind and settled in the North East of your nation. They crushed the Anglo-Saxon kingdom of Northumbria along the way, and now rule a kingdom of their own up north known as the Danelaw! See that they do not take over the whole of England, by keeping them in their place.

The normal Earl Card rules of Ortus Regni and the normal victory conditions apply. Holding a Fief in the Danelaw will allow an Earl to remain in the game, even if all the Fiefs in their Earldom are lost.

There are 3 Fiefs in the Danelaw. Each of these are captured separately. And each Danelaw Fief is a Castle, strength 2, and also initially (and when neutral again) has 2 Viking Infantry which are automatically fielded on defense when attacked.

An Earl must therefore initially siege a Danelaw fief with 4 incoming attack points to claim it; Each Fief is initially defended, so a Battle Card will be drawn. Danelaw Fiefs, like the Vikings, do not accept Ransoms.

When a Danelaw Fief is attacked, move the white combat marker out as normal.

When a Danelaw Fief has been captured, and the battle has been resolved:

Due to their great distance from the heartland of your Earldom, Danelaw Fiefs have the following restrictions:

A Danelaw Fief is outside of an Earl’s Towers – Towers do not defend these Fiefs – but an Earl may field whatever forces they normally may, when defending their Fief against opponents.

The Vikings and the Danelaw:

When the Vikings arrive the first thing they will do is attempt to re-conquer any lost Danelaw Fiefs!

If any Earls own Danelaw Fiefs then prepare the Viking Bag in this special way, when the Viking arrive or are active:

(Note that this step can be skipped if a single Earl owns Fiefs in the Danelaw, since the Vikings automatically attack their holdings, and all Danelaw Fiefs are otherwise identical.)

When the Vikings attack a Danelaw Fief no Earl is guiding their attack, they attempt to Siege that Fief’s Castle. If they take damage in the Battle it is assigned first to Viking Infantry, and only to Chieftains if no Viking Infantry remains. The Danes know well their own lands, and have many settlers there willing to aid and guide them in their campaigns, minimizing losses.

When and if a Danelaw Fief is recaptured by the Vikings it then reverts to having its 2 automatic Viking Infantry defenders. It may again be captured by an Earl, and if “freed” it will again provide 1 Army card immediately after it is seized. But, if so, the Vikings will still only target Danelaw Fiefs until they have secured their homeland in Britain.